I am very happy to announce that the Kamusie bilums will be on display for mother’s day celebrations at The Dear Delicious in Dulwich Hill (Sydney) from today onwards.

Your mum will love a bilum, it contributes to tell the stories of those women living in Kamusie, a remote area of Papua New Guinea Western Province.

It all started in 2015, read more about Bilum Stories.

When I stretched my legs 5 minutes at a small airstrip in one of the numerous remote areas in the Western Province in Papua New Guinea, I never thought this short plane stop would change lives!

We had stopped there in the morning during the many stops of the Gulf run and we had to go back in the afternoon to refuel. The villagers knew that well, being used to see the good looking blond blue eyed pilot on a regular basis – they liked him, he had a kind soul and always has a thoughtful word when locals greeted him.

While the morning stop was rather unattended, when we approached in the afternoon, most of the villagers were waiting at the other side of the small barrier. They knew someone different was on the plane, a ‘white’ woman. They were curious. As I came out of the plane, the pilot directed me to a safe area while the refueling was happening. A lady bravely approached me for a chat. Amy is one of the local teachers and explained briefly life in the village. Then, the plane was ready. I bid her farewell. All eyes were directed to me, I smiled and waved without knowing that something was about to change lives.

This brief encounter stayed in my mind and three weeks later, I asked the pilot to deliver a letter to Amy for me. I thought that this isolated village may need some items for school or for ladies. That’s how the “Bilum Stories” Project was born. Empower, educate women living remotely and share their life stories to the world.

They needed items for school and some clothes. I managed to collect those items among my friends in Australia and Europe and forwarded them to the village. Each bag delivered was in exchange of a natural fiber bilum. Why a swap are you going to ask me? Well, I believe that when you give something for free, often those objects have not much value to the recipient. On the other hand, an exchange with something that those ladies could craft with local fibers is showing them respect and interest!

What is a bilum? It’s a bag, a friendship bag. Each Papua New Guinean has a bilum. Each bilum has its own characteristics depending on the area where they are crafted, then each family has its own pattern. Since each person owns and wears a bilum, each person also has a its own story! 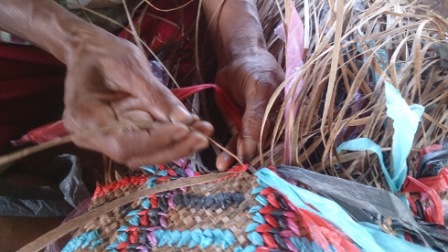 Ladies were keen to get this idea started and got together to craft. They wondered what was coming with the next delivery and were all happy to discover pencils, games, pens, clothes and accessories – each and every item was a real treat!

I visited them again in January when they had gathered all the bilums for me to take to Australia and show other women. I had a wonderful welcome and spent a few hours with them sharing food and their traditional sago. That was a very special treat for all of us! I am not easily overwhelmed but I must admit that day I felt very humble. Each wanted to show me their craft, wanted to talk to me, wanted to touch me. Kids surrounded me, some even were scared seeing my white skin. Then, the group walked me back to the airplane and confessed that I was the first woman coming to visit them just for the pleasure to pay them a visit – not as a missionary – not to take anything from the land!

Today, we are creating their local Health & Well-Being Newsletter covering community news, natural medicine recipes with fruits and vegetables that are grown locally and recyclable ideas so they keep a tidy village with the lowest possible dump.

Early March, I presented “Bilum Stories” for the first time to a Social Scientists Event organised by the Belgian Embassy in Canberra and the idea and topic were very well received. Next week, the bilums are going with me to Sydney to where I will show them to another audience and raise awareness of lives and stories of the ladies who crafted them.

Each bilum is precious, each bilum was created with LOVE
to connect with ladies around the world.

The ladies of the Western Province are all looking forward to hearing about the travels of their bilums!

It is amazing how a few minutes can change lives isn’t it!